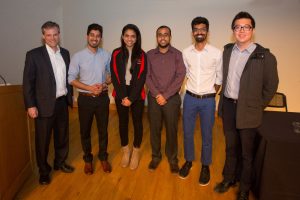 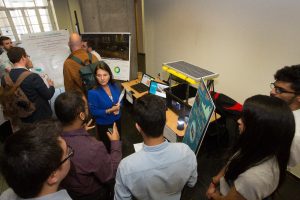 Tackling the major issue of inexpensive and reliable lighting in refugee camps, ETIM team, including Raghav Madan, Omkar Powar, Tanvi Dhande, Kunal Ashok, and Cheng Lin, devised a fully functioning prototype of a solar hub and spoke system in the week-long Rothberg Catalyzer Challenge. Our students placed 3rd out of a total of 14-15 teams and won $1000 in the Innovation Hack-a-thon that was sponsored by the College of Engineering and the Integrated Innovation Institute. 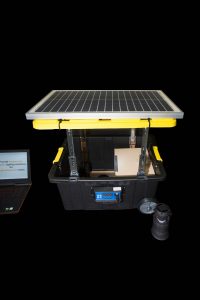 The highly mobile solar hub worked as a charging station for the portable solar lanterns (spokes) along with enhancing community interaction by acting as a street light. Students discovered multiple safety concerns in such camps for women and incorporated a distress signal button in the lantern. This could be pressed in case of emergencies which alerted the closest hub system via wireless modules. The lantern flashed red light and the nearby hub also followed, alerting the community with a loud buzzer sound.